How to Find the Ideal Writing Spot

Writing requires concentration and lots of mental energy. That is one reason where you write is important. If you are in a location that it not conducive to concentration or is uninspiring, it can be hard to get your writing done.

In an ideal world, I would be writing in a large, clean, sparsely decorated room with inspiring objets d’art, and two huge picture windows. One picture window would have an amazing view of the sea, and the other of snow-capped mountains. Aside from the geographical feasibility of that ideal location, it is simply an ideal, not my reality. But, knowing what my ideal location would be tells me some things about the kind of places I should seek out for writing. It is important for me to be somewhere with something nice to look at. I draw inspiration from my surroundings. It is also best if I am in a quiet place, with few distractions.


Do you enjoy the quiet or do you like a bit of bustling around you as you write? How important is your view? Do you prefer to write in a warm place or a cool place? Do you want to hear birds chirping, conversation buzzing, classical music, top 40 hits, cars whizzing by, or nothing at all? There is no right or wrong answer to this question, but thinking of your ideal writing spot can help you figure out where is best for you to write and where is simply not conducive.

I know for sure that the most important thing for me is a minimum of distractions. That is why it is often difficult for me to eat at home, where there is laundry to be done, clothes to be picked off the floor, plates to be washed, and lots of snacks in the kitchen to be eaten. My office works sometimes, but only when it is fairly well organized and my door is closed – signaling to potential visitors that I am busy.

My office and home have the advantage of being quiet, for the most part. And, I prefer the quiet for writing. But, I am willing to sacrifice that for the lively energy of a coffee shop. Thus, two days a week, I make my way to a local coffee shop to write. When the next table gets a bit rowdy, I pull out my earphones and put on Pandora.

Other people find that quietness is the most important aspect of a writing space. Thus, they seek out library carrels, empty conference rooms, home offices, secluded cabins in the woods,

Choose a good place to write because writing is important


Choosing a suitable writing spot also has the advantage of signaling to yourself that writing is important enough to you for you to make the effort to find the best place possible to do it. Doing so can be empowering insofar as you are not only writing, but acting like a writer, like someone who writes and takes it seriously.

Think about it. What would be your ideal writing spot? If you can’t recreate that space in your current environment, what aspects of it can you recreate? Can you find the quiet, the inspiration, the movement, the view, the space you need anywhere close to where you are?


Pick wherever works best for you and let the ideas flow!
Posted by Tanya Golash-Boza at 1:07 PM 1 comment:

How to Move Through Your Writing Block

For many writers who work in academia, the end of the semester means that it is time to submit grades, attend a wide variety of events, wrap up service commitments, and get back to that looming writing project. If you have been working on your writing project all year long, transitioning to the summer should be fairly straightforward. You just keep trudging along. However, if you have not been writing all year or all semester, moving back into writing can be daunting. For this reason, I suggest you not write today, but dedicate today to making a plan for writing.


If you keep telling yourself today is the day you will begin the second chapter of your book or pick up that Revise and Resubmit or begin that article, yet have not actually made any progress, then a simple solution for you might be to make a good plan for moving forward. By a plan, I simply mean that you break your large task down into small chunks and decide where to begin. That way, instead of having on your agenda: “Begin to work on Chapter Two,” you have: “Take notes on Parenti and Gilmore articles and write one paragraph on deindustrialization in the 1980s.”

There are two ways to figure out how to break your large task down into smaller tasks. The first way is to break it down in a list. The second is to draw a mindmap. Both work equally well. The first way works better for linear thinkers, the second for visual thinkers. I will explain both below.


Let’s say one of your summer goals is to finish Chapter Five. Here is an example of how you would break down Chapter Five into manageable tasks.


The idea behind this sort of listing is that you plan today, and then wake up tomorrow, not with a task that says: “Finish Chapter Five,” but with a manageable task: “Use notes from Alexander, Schlosser, and Wacquant to explain Mass Incarceration.” Once you finish that task, you can check it off and move on to the next.


Some people think more visually, and it is easier for them to come up with a list of tasks to do through the use of a mind map. Let’s say your task is “Finish Chapter Five.” Write that on the left hand side of a blank piece of paper. Now, draw lines out from the circle that explain the big tasks you need to complete in order to finish the chapter. Next, draw lines from each of those circles that break the tasks down into smaller pieces. Keep doing this until you get to manageable tasks. Here is an example: 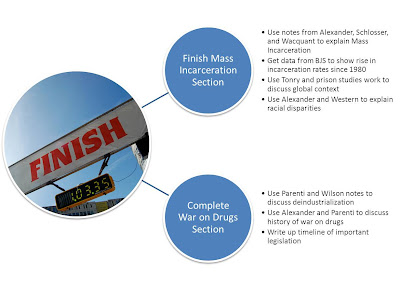 If you have not begun planning yet, I strongly recommend that you plan first, and execute later. Use today to plan, and tackle the tasks tomorrow. Once you finish planning today, take a break and give yourself a treat. Relax and prepare for your big writing day tomorrow.
Posted by Tanya Golash-Boza at 9:04 AM No comments:

Getting Through Your Writing Resistance: Ten Ways to Write When You Don’t Feel Like It

Don't feel like writing today? If writing is part of your job or your passion, it is important to find ways to move through your writing resistance. Here are ten ideas.

Ten Ways to Write When You Don’t Feel Like It

You can be extraordinarily productive by writing two hours a day, five days a week. Many writers find my suggestion ludicrous and instead aim to write eight hours a day. Unable to write for eight hours, they berate themselves and spend lots of time thinking how much less productive they are than other writers.

I have tried many different ways of convincing writers that it is so much better to write for two hours a day and move on to other things than to try incessantly to write all day without success. The former leads to feeling accomplished and productive on a daily basis, whereas the latter leads to burnout and less productivity. It may not make sense, but it is true: writing for two hours a day is a much more effective long-term strategy than trying to write for eight.

In this post, I will try again to convince readers (and writers) that this is true, using myself as an example. This past semester, I wrote every day, Monday to Friday, for two hours. I did lots of different things during those two hours, but I mostly drafted new text, revised old drafts, and took notes from books and articles. Between January 1 and May 1, in four months, I drafted a total of about 42,000 words of new text. That is the equivalent of four articles. It took me about 80 working days, so that is an average of about 525 words a day.


Now, for the caveats. These 42,000 words include writings I have done before and pulled together. Much of my work is based on interviews, so I write up summaries of my interviews after I do them and place those summaries directly into my drafts. So, let’s be conservative and say I drafted the equivalent of three 10,000 word articles this semester. This is a conservative estimate because I also wrote 15 blog posts, revised two articles, and did a 2500 word book review essay that I am not including in the 42,000 word estimate.

The other big caveat is that those 42,000 words need editing. I estimate that it will take me another four months to get those 42,000 words into shape and ready for submission. It often takes me as long to revise an article as it does to write the first draft. So, that’s three articles in eight months. Of course, that writing is based on reading that I did during this semester and have done previously, and includes some earlier data analysis. So, let’s add on another four months for data analysis and reading, although keeping in mind that I also write daily while analyzing data and reading. All told, it seems as if writing two hours a day, five days a week for one year is enough to analyze data the data for three articles, draft those three articles, and revise them for submission to a journal.

The trick is to start writing two hours a day every day from the moment you begin your tenure-track position. The good news is that many people are revising articles on the basis of their dissertation and thus already have data collected and analyzed, and drafts of articles ready to submit, making this process go even more quickly.

If you focus on writing every day, you can’t help but be productive. Trying to write more than humanly possible will lead only to frustration and burnout. The best way to be productive and stress-free is to write every day for two hours a day on a consistent basis.
Posted by Tanya Golash-Boza at 2:40 PM 3 comments: