Three Things Your Academic Book Must Have: An Argument, a Theoretical Contribution, and a Structure

I recently challenged authors on Twitter to state the core argument of their non-fiction book in a tweet. It’s harder than it sounds to state your argument clearly and succinctly. It’s also a necessary step in the manuscript development process.
If you are writing a nonfiction book and can’t articulate the argument in a tweet, don’t worry. I have written several books, and usually have no idea what the argument is until I have drafted most of the chapters. If you aren’t there yet, keep writing and thinking.

You need an Argument

So, what is an argument? An argument is not a topic or a description of themes the book addresses.
Instead, as Wendy Belcher writes in her book, an argument is a statement someone can disagree with. And, as Helen Sword explains, every non-fiction book needs a question. The process of leading the reader from your question to your answer is your argument.
Here are some examples of clear and succinct arguments from the tweet thread: 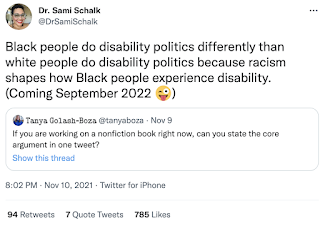 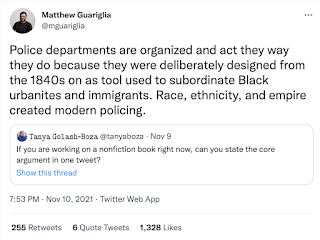 The thread inspired me to gain some clarity on my argument in the book I am currently writing. I have been writing this book since 2017, have drafted most of the chapters, and am still working on my argument. Thus, I came up with two versions. The first version describes the argument I am making in the book, using academic language.

I explain all those big words in the book. But, after reading through the thread, I realized I liked the arguments that use simple language better. So I tried again:

The choice to use prisons and policing to solve the problems faced by Black communities in DC in the 20th century, instead of investing in schools, community centers, social services, health care, drug treatment, and violence prevention, is what made gentrification possible in the 21st century.

As you can see, you can disagree with this statement. And, per Helen Sword’s guidance, my argument answers my guiding question of what factors led to gentrification.

You need a theoretical framework

In addition to an argument, you need a compelling theoretical framework. The theoretical framework is where you explain how your argument is novel and how it relates to what we already know about your topic. You could have a great argument like: “Mass incarceration is the New Jim Crow,” but, Michelle Alexander already made that argument so it’s unlikely anyone would want to publish that.

An academic book does not need a literature review in the same way a dissertation does. If you don’t believe, me, pick up your favorite academic book and see how much lit review there is in the introduction. Often, it’s just a few paragraphs. It is almost never a full chapter.

The manuscript I am working on engages with three fields: housing inequality, the War on Drugs, and gentrification. Thus, I explain in the Introduction what we already know about these three areas and how my intervention is new.

The Introduction explains how Black communities, even those dominated by Black homeowners have been dispossessed; how poor, working, and middle-class Black communities across the city experienced disinvestment and then coercive investment, and how reinvestment is racialized today. As you can see, it all has to stay on the same theme – with a tight focus on the core argument.

You need a structure

There are other ways to build an argument. In my book Deported, I set the book up to follow a deportee’s journey, from growing up in the country of origin, to crossing the border, to growing up in the US, to getting into trouble in the US, to getting caught, to detention, and then to life after deportation. This structure allowed me to explain how global capitalism shaped each aspect of their migrant journey.

Finally: Writing a book is an iterative process.

Since it takes years to write a book, make sure you have a community to support you through this long process. If you don't know anyone working on a book, the Twitter thread has lots of people you could reach out to and ask if they are also looking for support.